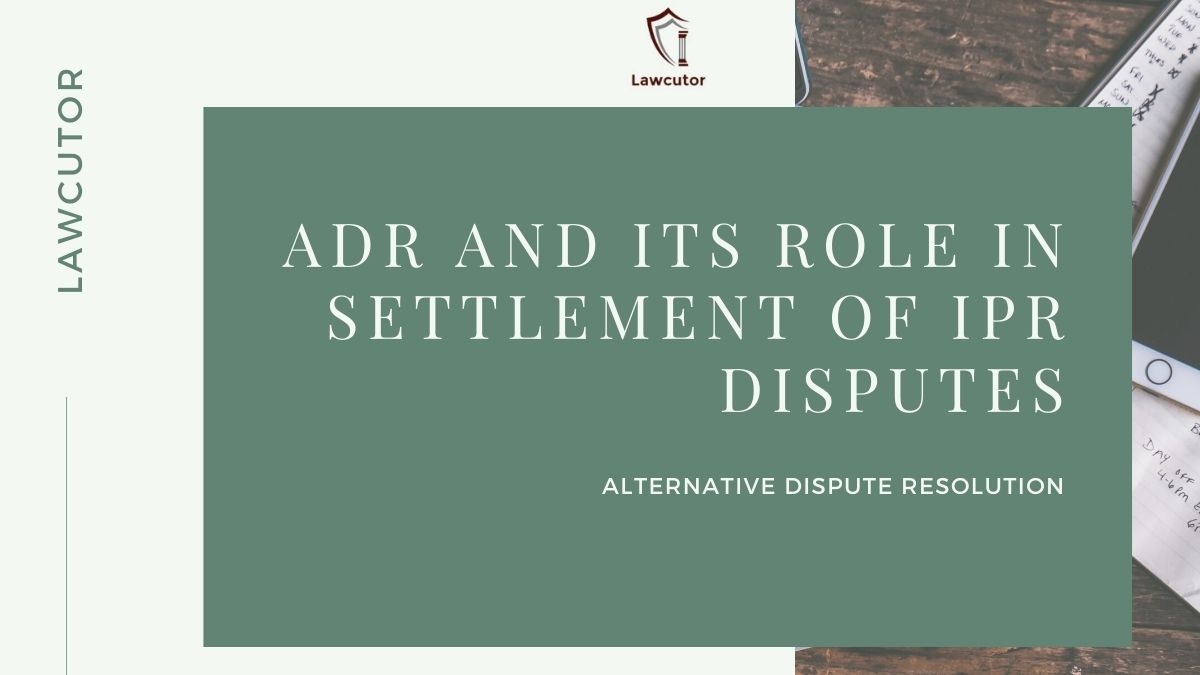 This article aims at explaining Alternative Dispute Resolution, its importance, growth and significance in resolving Intellectual property disputes. Data and information has been collected from some reliable websites explaining the concepts clearly. The article deals with aspects such as Alternative Dispute Resolution, its types, the Indian and international perspectives. It further deals with describing intellectual property rights and most importantly the role of alternative dispute resolution in resolving intellectual property rights and its evolution with time. This article examines how Alternative dispute resolutions have helped in decreasing the burden from litigation and resolving disputes more feasibly than courts and how out of court settlement can be cost and time saving.

ADR is (alternative dispute resolution) the word itself describes, other ways to resolve a dispute rather than going to court. It is a confidential and alternative method of handling legal disputes.

It is also called external dispute resolution. It is a procedure for settling disputes without litigation.

Unlike court, ADR methods are synergetic and allows both the parties to understand each other’s situation and to come up with a more accepted and creative solution that a court may not be legally allowed to impose. It also reduces the burden on the courts and can be relied upon for the fast settlement of cases, the method is very helpful in a country like India where a lot of cases are pending. ADR listens to both the parties and the judgement is given by looking upon the benefits of both the parties hence, ADR is a method to resolve conflict in a peaceful manner.[1]

International and Indian Status of ADR

In a country such as India, the number of cases filed has shown a great increment in recent years resulting in pendency and delay in such case ADR has come up as a boon for our country.

Where fast track courts are been set up in our country, ADR itself aims at a fast track system of dispensing justice. [2]

The technique of ADR has been adopted by many countries such as the USA, UK, Francs, Canada, China, Japan, South Africa, Australia and Singapore.[3]ADR has emerged in these countries as an important and significant movement. It has not only helped in reducing time and cost but also shown great impact and provided the less formal and less complicated stage for various types of disputes.

There are various types of ADR such as

Mediation:- mediation is done through an independent mediator who listens and facilitates communication between the two parties. Mediation aims at achieving a settlement or resolution  smoothly and calmlysmoothly and calmly. The mediator will discuss both of the issues and try to help both the parties to reach a common agreement on which both the party agree upon. The mediator generally does not offer their own opinion.

Arbitration- This method of ADR is more formal when compared to mediation, it includes a process where the main decision is of the arbitrator in resolving a dispute. This method is used asnot all kinds of disputes can be solved through mediation, some require proper skill and technique, some disputes need privacy. The decisions of the arbitrator are binding. Many contracts even contain an arbitration clause.

Adjudication:- construction contracts are the arising source of this kind of ADR. It is mainly formal which includes various steps, such as providing written notice of adjudication, appointment, serving a referral notice, a response to the referral notice and finally a decision being reached by the adjudicator within 28 days of referral notice.

Negotiation:-  It is a method through which differences are settled. In this kind of method mainly there is a party that is compromising on a certain thing that is causing the dispute.

Negotiation aims at achieving mutual benefit and maintaining a relationship.

Conciliation:- Conciliation is the action of stopping a fight or dispute between two parties in this method the conciliator meets both the parties separately and try to resolve the dispute by looking at the benefits of both the party.

If anyone else iestries to infringe or use someone else’s product then he \ she can legally sue that person from doing so, henceforth, IPR entitles a person of his product or creation and prevents other people from copying it.

The emerge of IPR is not new but it was started in north Italy during the Renaissance era.

Some common kinds of disputes can occur through,

Role of ADR in IPR

Some of the global challenges such as the digital environment, the action of traditional knowledge, traditional cultural expressions and the preservation of biodiversity is leading to new kinds of intellectual property disputes. Due to such issues, the parties tend to shift towards the more cost efficient and time-saving method of dispute resolution. Economic plunge also has a role in this as the parties want to adopt the more affordable and more convenient method of dispute resolution which can never be through litigation, these issues make alternative dispute resolution the best alternative method to solve disputes.

WIPO (WORLD INTELLECTUAL PROPERTY ORGANISATION) Centre is an arbitration and mediation centre which was established in 1994 on a not-for-profit basis to facilitate the time and cost-effective resolution of IP and related disputes through ADR. Basically, the past experiences have proven that there is large-effectiveness of ADR in the resolution of intellectual property rights disputes. The ADR mainly depends on the quality of the mediator or arbitrator or expert. Therefore, the WIPO Centre maintains approximately databases of over 1500[6]qualified neutrals from 70[7] countries with further candidates added according to case needs, and it assists in the appointment of neutrals in each case.

Not only does the WIPO centre work for dispute resolution but it also raises awareness about the importance of ADR in the coming generation and the amount of role it can play in all the different sectors. There are a lot of benefits of using an ADR such as neutrality, expertise and confidentiality. ADR aims at a neutral decision, which means that it acts as a neutral umpire. Therefore, neither of the parties can enjoy their home litigation advantages. It aims at providing expertise, as in the informal settlement, both the parties can have their choice of mediator or arbitrator who is expert in that particular field. It also aims at providing confidentiality, many times there are huge companies who go through disputes and do not want their confidential information to be released to the public as they even conscious about their public image. In such situations, ADR helps in maintaining confidentiality and is the best and the most secure way to approach into keeping up the classification into determining dispute through ADRs, being party-centric it gives immense importance to secrecy and confidentiality. Some of the Indian organisations such as Delhi legal services authority (DLSA) has referred to 500 pending oppositions and rectifications in the trademark registry (TMR), Delhi, to mediation and conciliation a public notice. [8] There are many positive steps also taken towards mediation of IP disputes through the introduction of Section 12A in the commercial court act of 2015 The Act”) via Chapter IIIA of the Commercial Courts, Commercial Division and Commercial Appellate Division of High Courts (Amendment) Ordinance, 2018 (“The Ordinance”) to mandate pre-institution mediation and settlement in cases where no urgent relief has been sought.[9]

ADR system is more likely to be adapted in case of intellectual property disputes it permits gathering to investigate proper course that may not be generally be given by the court. In cases where the court can’t give proper judgement on both the Sides ADR listens to both the parties and comes to a common conclusion. money-related disputes remain the most well-known structure looked for in WIPO cases, parties regularly likewise demand to expect activities as a cure. infringement of licensed creation rights, since it is related to two-party debate, It can be very much settled and mediated by utilising elective question goal measures.

Furthermore it tends to be said to go out to be an extremely productive system for settling IP debates in the coming years.

[4] Jose , what are the different types of intellectual property? , legal match , www.legalmatch.com

[5] Jose, what are the different types of intellectual property? , legal match , www.legalmatch.com

[13] Chinmoy Pradip Sharma , Resolution of disputes involving IPR through arbitration in india an alalysis of the legal position , published on : 21 may ,2019 , 4:00 pm , Bar and bench , www.barandbench.com