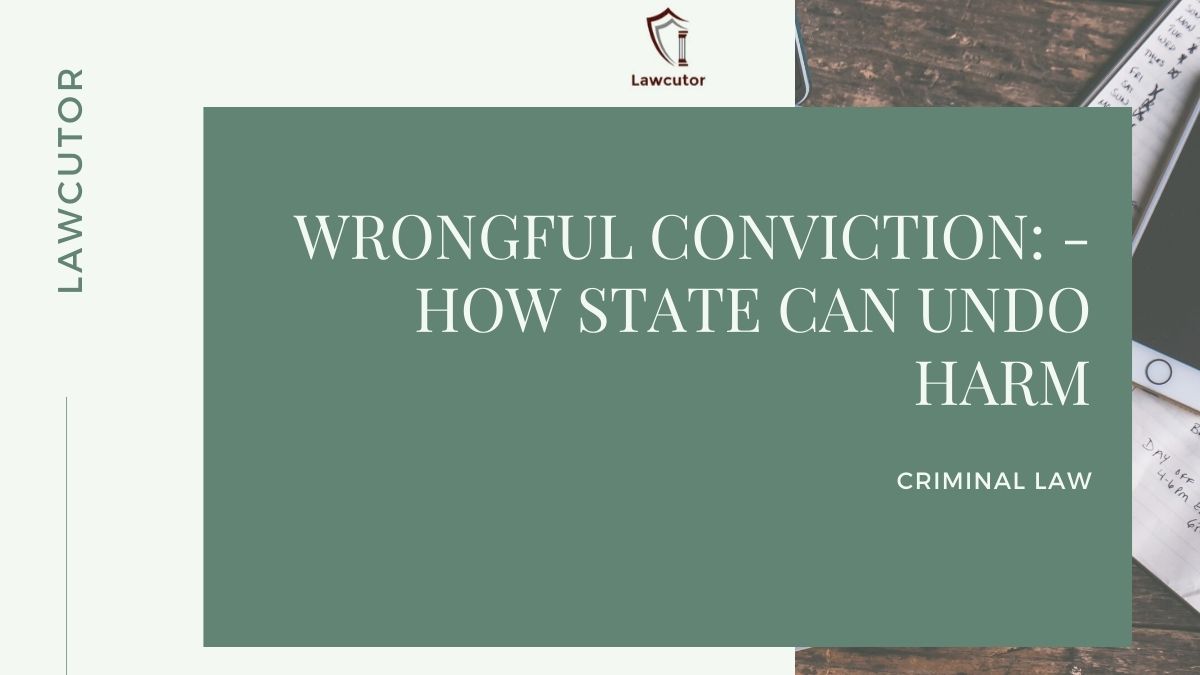 We have studied in our book from childhood that a hundred murderers should be let out but not one innocent should suffer, no one treats them unequally. But the reality of our criminal justice system is that people are deteriorating in jail because of wrongful convictions and there is no adequate remedy available for them which is the worse part. The Wrongful convention is one of the major mistakes conducted by the state. There is an urgent need to make changes and create laws for preventing state atrocities. In this article, we will discuss wrongful convictions with respect to Indian and International aspects and how the state can reform its laws.

A Wrongful conviction is the imprisonment of men or women, who is innocent due to the state’s negligence. It is an error injustice meaning i.e., in the interpretation, procedure or execution of the law which violates the basic principle of law and results in an erroneous conviction.[1]People have to waste their time in jail and the condition of jail is in a pathetic shape. Some jails are even lacking with basic necessities of life like appropriate sanitation. It can be done with a mala fide intention but often, in fact, it is due to the sheer untidiness of authorities. It evokes the state’s liability towards the wrongful conviction.[2] It is a time to provide remedies like compensation to the individuals who suffers from this. Maybe compensation is not sufficient because our criminal system cannot return time which they have lost in jail. In the 21st century, wrongful conviction is a black spot in the criminal justice system around the world where laws are changing from retributive to reformative; there is a violation of the basic rights of human. Babloo Chauhan v N.C.T Delhi[3]Delhi high court held that wrongful conviction is a form of a miscarriage of justice and there must be a legislative framework to ensure that people are not wrongfully prosecuted and if they are appropriate remedies are provided to them.

The concept of the wrongful conviction for India is not new. From the British era, to the Modi era cases of wrongful conviction has increased only. Constitution of India is silent on the concept of compensation for the innocent person.  Article 21 of the Constitution of India[4]guarantees right to personal liberty and to live their life with dignity to each and every person but in reality, sometimes it does not happens. The infringement of fundamental right due to police atrocities, prosecution misconduct and lack of judicial approach provokes the criminal justice system to bring out compensation scheme and legal mechanism for the victims of the wrongful conviction. It does not mean that there is no remedy for the victims. There are court-based remedies with respect to a miscarriage of justice resulting in a wrongful conviction. They are Criminal Law Remedy; Public Remedy; and Private Remedy. In the277th report titled “Wrongful Prosecution (Miscarriage of Justice): Legal Remedies” (August 2018), the Law Commission of India has suggested the standard of ‘wrongful prosecution’ be applied in India. This standard will be applicable to cases where the police or prosecution maliciously, falsely or negligently investigated or prosecuted a person who was found not guilty of the crime. The Commission recommended certain specific amendments in the Code of Criminal Procedure (CrPC), 1973 in order to incorporate the provisions for compensation. The Commission even presented a draft amendment bill for the CrPC. However, Parliament has not paid any heed to the observations and recommendations of the Law Commission to date.As we are aware we have the provisions under the Code of Criminal Procedure, 1973 regarding what trial courts and higher courts are required to consider in case of errors in charge framed by trial courts. We also have provisions which deals with the effect of irregularities committed by trial “magistrates. Some provisions also cover the irregularities committed by criminal courts. However, the Code does not provide any provision which deals with the irregularities committed by investigation officers (I.O) in the course of an investigation. This oversight is perhaps owing to feel that irregularities in an investigation have a role to perform in appreciation of evidence by courts.

The Wrongful Conviction concept has been enumerated in the Universal Declaration of Human Rights, 1945.[5] It is a violation of human rights. It has also been elaborated that the state must pass legislation to protect the victim of wrongful conviction; compensation should be paid to them within a reasonable time frame. Further in Article 14(6) of the International Covenant on Civil and Political Right, 1966[6] confers an obligation upon the state to prevent the miscarriage of justice resulting from wrongful conviction. The State has to compensate the victim provided that the conviction was final, and was later reversed or pardoned on the ground of that he was innocent.

Many countries in accordance with the above – mentioned guidelines have enacted their own statutory provision for wrongful conviction. In the United Kingdom, the Criminal Justice Act of 1988 has been implemented. Under which compensation scheme is there for a person who has suffered punishment as a result of wrongful conviction by the Secretary of State. A Similar provision has been provided under Article 34 in Germany Constitution.

Hussainara Khatoon v. Home Assistant State of Bihar[7] In this case, for the first-time the issue wrongful conviction was raised when women and children, was arrested and detained in the prisons of Bihar as under trials for 2-5 years. Some of them, were arrested for a minor charge for which law has prescribed a punishment not more than few months. After the writ of Habeas Corpus was filled in the Apex Court, it revealed all the truth of under trial in the state of Bihar and challenged the administration of justice in the state.

Ayodhya Dube & Ors. v. Ram Sumar Singh,[8]Court stated that lack of judicial approach, the prosecution misconduct and the courts and inappropriate consideration of important evidence amounts to perversity which can give rise to a wrongful conviction.

In Ram Lakhan Singh v. State Government of Uttar Pradesh,[9] Supreme Court held that in cases of wrongful prosecution, it is a violation of a fundamental right of the individual. It is an abuse of the process of the criminal justice system. Thus, the courts in such a case have the power to order the State to pay compensation to the aggrieved party to compensate him and set as an example of deterrence.

In Mohd. Jalees Ansari & Ors. v. Central Bureau of Investigation,[10]  the Supreme Court, wherein the court overturned the Terrorist and Disruptive Activities ( Prevention) Act, court’s decision, ruling that the confession was not true and taken under duress and being the sole basis of the conviction didn’t have the legal sanction and was inadmissible. Finally, after 23 long years of wrongful imprisonment, Nasiruddin was exonerated of all charges.

The wrongful convictions of an individual who is innocent are a malady for the criminal justice system. A victim has to suffer from lots of things going away for a crime which he did not commit and spending a major part of life in a prison from family, friends and former life is a terrible fact of today. Not only physical, wrongful conviction affects mentally also. There are a plethora of cases in which a person who is innocent but wrongfully prosecuted by the state turned into a criminal after spending a long time in jail because of living in such a miserable condition. In India, there is a lack of compensation scheme and legal mechanism which allows the state to punish for its mistake. There should be a clear cut provision in the law that provides relief to the victim.  Also, an independent board has to be created to ensure that complaints resolve within a time frame so that no one has to face wrongful conviction. Right now the protection is the need of the hour because it is a violation of basic human rights.

[6]International Covenant On Civil And Political Right of 1966