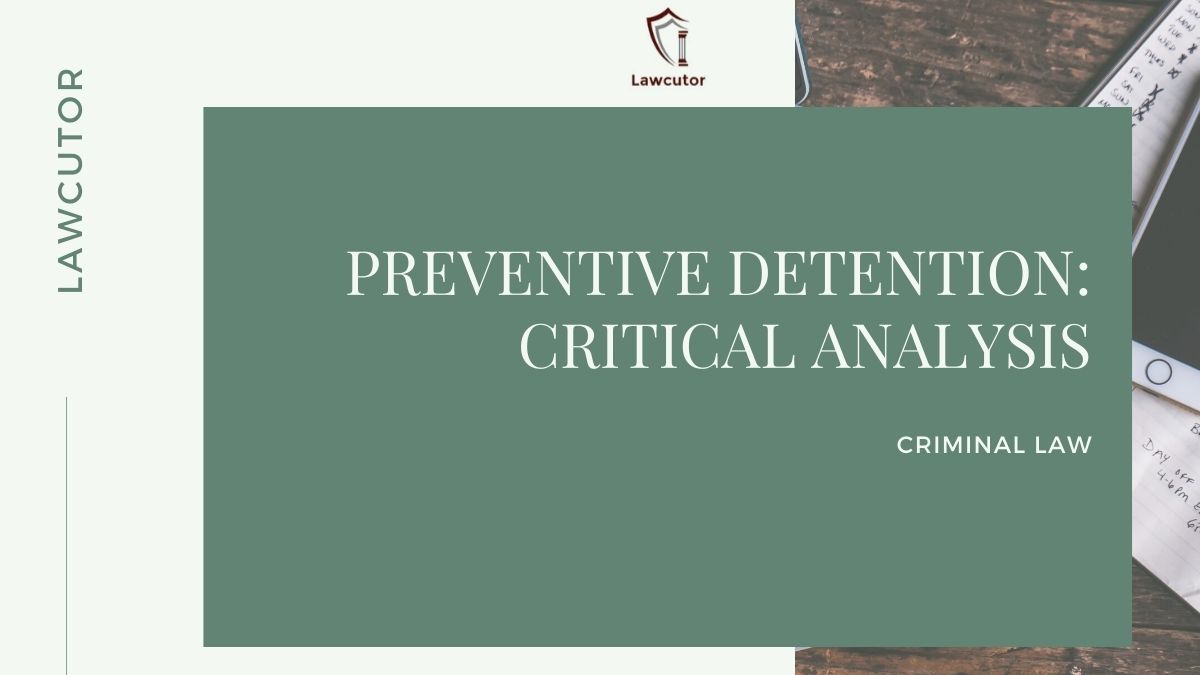 Preventive Detention is an explicitly used term for certain purposes which subject to certain safeguards that are expressly given in the Constitution of India. Earlier this law was made for safeguard purposes and the measures were used very cautiously only in a grave situation that affected the State but nowadays this law is used as a tool for the government to detain any person at any time which violates the right to personal liberty of an individual. In this article, we will critically analyze the Preventive Detention laws and their current scenario in India and International both perspectives. This article also deals with answers of what government should do for Victims.

The Preventive detention concept existed all over the world still its universal definition does not exist. Preventive Detention is the detention of a person beforehand to prevent the possible commitment of a crime so that peace and order is maintained within the society.A Police Officer may arrest a person without Magistrate order and a warrant on grounds of suspicion that the person might do some wrong actions so that they can prevent acts that threaten the ‘public peace and order’ and ‘national security’.In India, the present detention laws are similar to the laws enacted by the British government if we track back the history.

There are a number of legal laws such as the Universal Declaration of Human Rights, 1948; European Convention on Human Rights, 1950 etc. are guiding principles in pre-trial detention, arrest and administrative detention. These conventions provide a significant understanding of laws that governs detention and arrest. Article 4 of the International Covenant on Civil and Political Rights (ICCPR) which allows that rights can only be restricted “in time of public emergency which harm the life of the nation” because it allows detention in peacetime as well. In many countries, such preventive detention laws are considered a serious criminal offender by reserved or subsequent judicial orders after they were originally sentenced.

The Constitution of India entitled the legislature to pass preventive detention laws such as Section 8 of the Conservation of Foreign Exchange and Prevention of Smuggling Activities Act, 1974,[6]Section 4 of the Armed Forces (Special Powers) Act, 1958[7] etc in order to ensure that certain offences are prevented even before they are committed. The basic objective behind such preventive laws is “Prevention is better than the cure”. The security of a state may be threatened either by war,[8]external aggression or internal disturbance, Here government can exercise its power of preventive detention on the ground of defence of the country.

The way Preventive Detention is being used by the current regime shows that we need to repeal the legislation instead of diluting it. Nowadays, preventive detainment powers are used to curb the voice of dissent.[9] In Uttar Pradesh, over 5558 persons were put under preventive detention to curb the voices raised against the Citizenship Amendment Act [10](CAA) for 17 days In North-East Delhi cases, there was a peaceful protest going on in a non-violent manner but victims are charged under UAPA[11]The conspiracy are creating an atmosphere of fear which would last and affect not one but many individuals till the end of the trial, which may extend to many years.

Therefore, they brand anyone as anti-national, urban Naxals and put them behind bars in the name of preventive detention. Even the response of the judiciary has been very bad.

In Anil Dey v. State of West Bengal,[12] the Supreme Court upheld that the ‘in the name of subjective satisfaction the detaining authority cannot be uplifted by the courts with an aim to appreciate its objective sufficiency’; a court will do review whether the satisfaction is ‘honest and real, and not fanciful and imaginary’.

The Supreme Court in Rekha v. State of Tamil Nadu,[13] the court described the preventive detention as “jurisdiction of suspicion”, and emphasized that there is a need to stick to procedural safeguards. When the detaining authority is fully satisfied with the subject then he can pass the order of detention.

In the judgment of Ahmed Noor Mohmad Bhatti v. State of Gujarat,[14] the Apex Court upheld the constitutional validity of Section 151 of Criminal Procedure Code, 1973, which empowers to Police to arrest and detain any person on mere suspicion without any warrant to prevent him from committing any cognizable offence.

In the recent case of  Nuzhat Perween v. State of UP and Anr.[15]  It was held that under National Security Act 1980 the order of preventive detention of Dr. Kafeel Khan is illegal. However, this case focuses. an issue concerning to wrongful confinement of a person.

The intention behind enforcing such laws was to maintain public order; prevent anti-social elements and for smooth governance but these laws directly affect the freedom of people and the fundamental rights given by the Indian Constitution. Article 22 though provides safety regarding arrest matters but it’s time to rethink and conclude that it is not a complete code. We could find alternatives that will not be against the international standards or introduce certain amendments like, limiting the scope of using these laws during an emergency. Further, reducing the power in the hands of executives and giving more to the judiciary itself and letting the apex court take the charge to preserve the true essence of democracy. Though any form of monetary compensation cannot cover the distress faced by detenu, we can try to introduce some rehab centers or any medical help centers if the detenu has faced certain mental and physical harassment even after being innocent.  Preventive detention laws should be used only when there is a grave national emergency and not during peacetime. The safeguards provided in the Indian Constitution for detaining a person strictly enforced and the rights of people should be preserved.