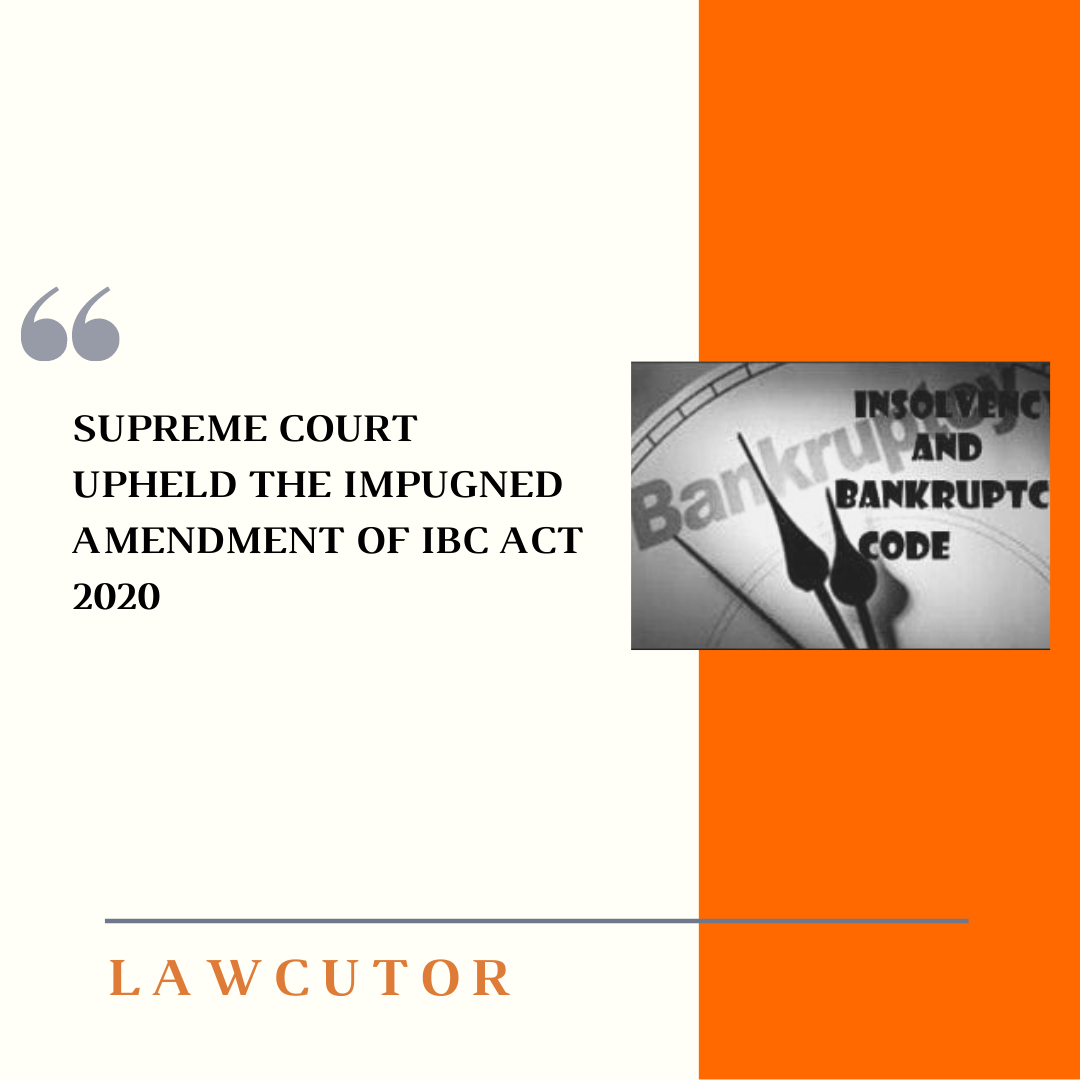 The petitioners have approached this Court under Article 32 of the Constitution of India.
The issue raised was Sections 3, 4 and 10 of the Insolvency and  Bankruptcy Code (Amendment) Act 2020 (hereinafter referred to as ‘the impugned amendments’, for short).

Petitioners contended that The impugned amendment clearly falls foul of the mandate of Articles 14, 19 (1)(g), 21 and 300A of the Constitution. The amendment by virtue of section 3 of the Amendment Act introducing the second proviso in Section 7(1) of the Code makes a hostile discrimination between financial creditors, the category, to which the petitioners belong and the other financial creditors. Secondly, it is contended that the amendment imposing a threshold restriction is afflicted with the vice of palpable and hostile discrimination qua operational creditors, there are inherent leakages in the impugned provisions which would make it unworkable.

The law provides for a period of 14 days for the Adjudicating Authority to decide whether an application under Section 7 should be admitted. Section 12 declares an inflexible time limit for the insolvency resolution process to be terminated. The whole purport of the provisions of the Code and the manner in which it is structured is geared to achieve a laudable object. The case of Pioneer Urban Land and Infrastructure Ltd. and another v. Union of India and others was considered for the matter.

It was further contended that as far as the third proviso is concerned while accepting the position that the 14 days period for disposal of
the matter under the Code has been understood to be directory and not mandatory.

While upholding Section 3 of the IBC Amendment Act 2020, which introduced the threshold limit for homebuyers application for insolvency, the SC observed :

“This will give halt to indiscriminate litigation. The legislative policy reflects an attempt at shielding the corporate debtor from what it considers would be either for frivolous or avoidable applications.”

The Court also upheld Section 4 of the Amendment Act 2020 which inserted Explanation II to Section 11 as a “clarificatory amendment”.

Section 32A Upheld stating that “We are of the clear view that no case whatsoever is made out to seek invalidation of Section 32A. The boundaries of this Court’s jurisdiction are clear. The wisdom of the legislation is not open to judicial review, and as far as above matter is concern the court hardly see any manifest arbitrariness in the provision.”

Bench comprising Justices RF Nariman, Navin Sinha and KM Joseph had considered the petitions. Justice KM Joseph authored the judgment delivered in Manish Kumar v Union of India & others & connected cases. Where the Writ Petitions and the Transferred Case will stand dismissed, however issued under Article 142 regarding court fees and about condonation of delay will apply to the applicants who are allottees.

Judges of the Supreme Court cannot be addressed as “Your Honour”
The US is Enforcing Fresh Sanctions on Two Generals from Myanmar Involved in the Coup.
No extra chance to civil service aspirants:SC
Calcutta High Court held that dismissal of a person from a job position solely based on disability is violation of rights.
Man returns home after inter-caste marriage, stabbed to death by girl's family
Motera stadium renamed narendra Modi stadium as president Ram Nath Kovind inaugurates the venue
Married woman's heirs on her parental side not strangers for the purposes of succession under Hindu Succession Act: Supreme Court
Denying the right to choose one's life partner is violative of FR: Himachal Pradesh High Court
Unless manufacturer's knowledge is proved, decision fastening liability upon manufacturer would be untenable
My Tweets